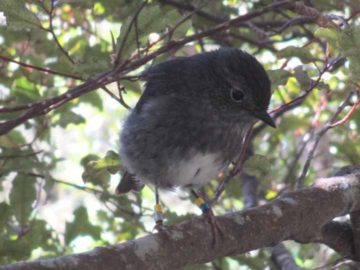 ‍It’s pleasing to see that Bream Head moves from one milestone to another with increased bio-diversity, schools regularly visiting the Reserve and events such as ‘Wild Kiwi’ with over 700 participants. It never ceases to amaze me the passion and commitment of fellow trustees and volunteers to support the very able rangers lead by Adam Willetts with Evan Davies and Bruce Cole-Baker. There are too many volunteers to name individually but I would like to thank Jane Barr for the many years of involvement she has had with the Trust. She is now making her presence felt in Tamaterau. The Northland Island robin release was a very significant milestone. It could be described as a dream come true for many when reflecting back on the journey of the Trust over the years. The robins are doing well and are monitored on a regular basis. The collaborative effort with Whangarei Heads Land Care Forum and incredibly fit volunteers made it all possible. Next year we look forward to the reintroduction of the whitehead. Additionally, we now have the grey faced petrel coming back to nest on Bream Head along with the many bellbirds, kaka and not to mention the rare skink find - all on our backdoor - Bream Head/Te Whara.

Contributed by Dr Dai MorganIn late July 2016 the National government announced a bold plan to make New Zealand predator free by the year 2050.In the near future, an entity called ‘Predator Free New Zealand Ltd’ will be established to oversee the development of a strategic plan to realise this ambitious goal. By 2025 it is hoped that New Zealand will have 1 million hectares of land where introduced pests are removed, show that large areas (>20,000 ha) can be pest free without the use of predator-proof fences, and have developed new technology to increase the efficacy of pest control. Accordingly, Predator Free New Zealand Ltd will be looking to invest in key projects across the country.This is where the Bream Head Conservation Trust enters the picture as we have been extremely proactive in realising the aims of the predator-free New Zealand concept. In addition to the extensive pest control work that has been done over the last 14 years, we also recognise that advances in technology are critical to maintaining pests at very low numbers and reducing the costs of doing this. Therefore, the Bream Head Conservation Trust submitted a significant bid to the Ministry for the Environment, and if successful, the Reserve will be used as a ‘living laboratory’ for the development of new technology. Read the Bream Head Conservation Trust Newsletter October 2016 (868kB pdf) for more details on this and many other stories.