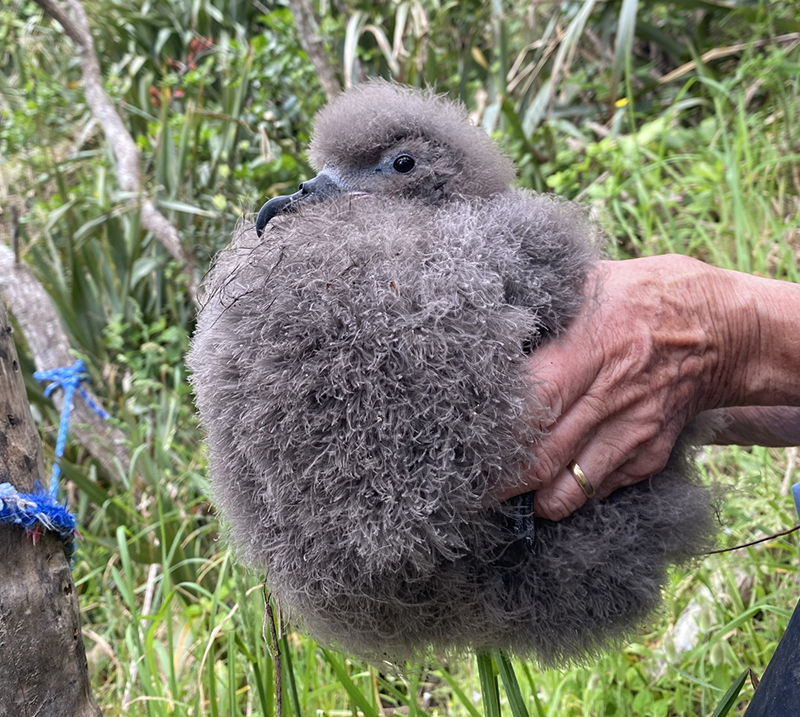 This is the third successful 100% fledge from the study site since the petrels re-established themselves on the steep slopes of Bream Head in 2016. These successes are attributed to the ecological restoration mahi of the Bream Head/Te Whara Conservation Trust (BHCT), particularly its intensive predator control programme.

Cathy Mitchell, a local seabird expert, had been checking the petrel burrows regularly and was delighted to find nine healthy chicks on her return to the site in November this year.  Cathy is very familiar with the grey-faced petrels as she helped relocate these birds on Matakohe/Limestone Island in the past.

Cathy is very happy with this seasons’ success again, saying “All the hard work by the Trust has really paid dividends, it is just fantastic to be involved with this mainland seabird protection at Bream Head/Te Whara. The burrows have very long tunnels but we were able to reach and apply lifetime bands to seven of the nine chicks which was extra special!"

Sadly, it has not always been a success story, as in 2020 all ten chicks on the study site were lost by a single stoat, which managed to break through the ‘defence’ line before the chicks could fledge. Tireless trapping, baiting and monitoring by the rangers and volunteers of the Trust are paying off. New control and monitoring technologies have been introduced to keep the birds safe.

BHCT project manager/head ranger Adam Willetts states: "We make every effort to help these special seabirds breed again on the mainland. We use all the current predator control tools available in the Reserve, such as automated lure dispensers, infra-red cameras, tracking devices, different baits and traps. It is intensive work, but it's so worth it when you see the chicks fledge on camera - that’s a very satisfying feeling for the team!”

It will be great to welcome these noisy birds back in approximately 4 years’ time when they will return to breed themselves on Bream Head /Te Whara.