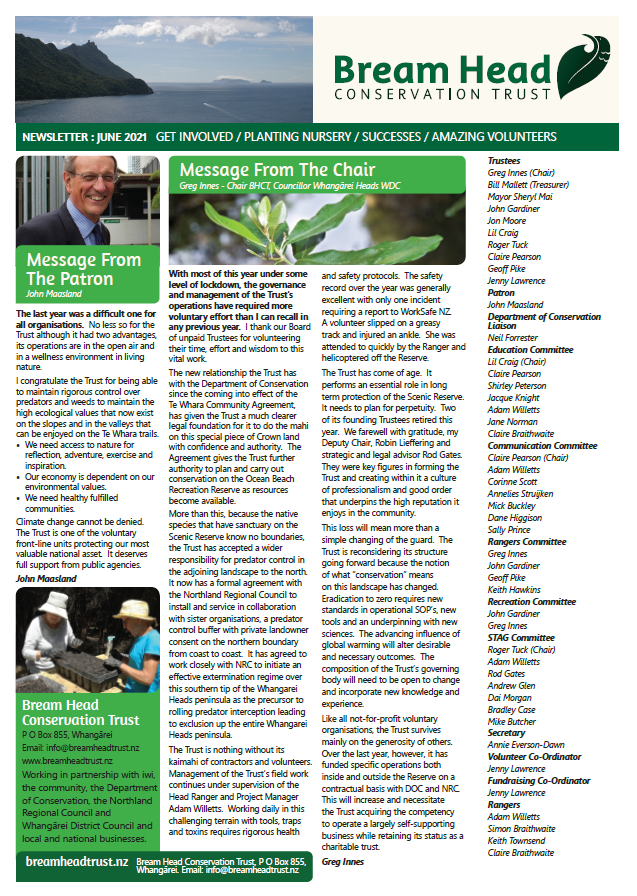 It’s been a tough twelve months all round the world but it hasn’t been all doom and gloom for the Trust.  As patron John Maasland says, we have twin advantages of operating in the open air and in the wellness environment of living nature. If you want to hear more from John, from Trust Chair Greg Innes or from our rangers and committees, read our 2021 Bream Head Conservation Trust Newsletter (3.9MB pdf).

As you may have seen in the newsletter we didn’t have enough space to include the full financial summary prepared by our wonderful Treasurer Bill Mallett. Bill’s introduction to the figures and the financial summary are below.

The table below shows a summary of the operational cash result for the last three years, 2019, 2020 and 2021.  Special projects and new equipment  are specifically funded but the rest of the expenditure has to be funded through donations, fundraising, grants and an increasing amount of contracts undertaken by
the trust for DoC and NRC.  However, despite this increased funding, we have still operated at a cash deficit over the last two years due in part to the reduction in corporate funding.

We are hugely grateful for the support we receive from our donors and grant moneys, without which we could not achieve what we have.  Added to that is the wonderful support we receive through the dedication of our 60 plus strong volunteer base who tirelessly service bait lines, cut tracks, deal to invasive weeds, monitor and record bird calls, run school visits and the all-important governance role of the trustees.

In the 2021 newsletter we also ran out of space for our rangers operational summary. So we’ve put the whole thing just down below. A huge thank you to head ranger / project manager Adam Willetts for preparing the summary and for his awesome work on the reserve.

2020 was definitely a tough year for everyone with the covid pandemic, and it was as equally tough for nature in Northland New Zealand too. Winter 2020 saw the second year in a row of well below average rainfall, driving the important groundwater table further into deficit. Plants that are normally able to survive marginally on Bream Head/Te Whara’s steep, rocky, exposed faces and thin soils, such as taraire and manuka, quickly engaged their survival instinct to drop leaves. However, on some exposed northern faces, unlike the taraire, a high percentage of manuka has been unable to survive. This has opened up light wells for pastoral and invasive weeds such as smilax and mothplant to thrive, as well as the loss of canopy for restoration progress. Birds, particularly kiwi who need the moist humus to seek food were forced down out of the reserve to low lying areas with far less protection. The five minute bird counts reflected this trend for most of the other species who reside in the reserve, with nearly all species showing a call count abundance percentage decrease from the years prior to the droughts. Possum trap catch rates did level off with that of 2019, but both years were higher than the low rates of 2016 – 2018. School visits dropped due mainly to Covid 19 restrictions and uncertainties.

The Trust operations team decided, after the successful survival of all the grey faced petrel (gfp) chicks in the 2017/18 breeding season on the back of the 1080 operation in the spring prior, to implement this tool again in order to try and protect the gfp and all other endemic species in the reserve. Unfortunately this time round the positive effect of our intensive rodent control programme meant that there were very few rodents at all to deliver the toxin to the stoats. Shortly after the 2020-1080 operation several stoats were seen running across Ocean Beach Road toward the reserve on numerous different occasions by several local Ocean Beach/Urquhart Bay residents. In December 2020, after many months without any catches, the Trust rangers and volunteers trapped 17 stoats. A mixture of adult and juvenile stoats were caught indicating a large reinvasion of non-residential* adult stoats from outside the reserve (*non-residential stoats because they were obviously not trap shy by being caught in traps. If they were trap shy residential stoats we would have never caught them). The tragic end result for the 2020 gfp chicks was total elimination by stoat(s) whose predation in the burrows was caught on camera. Other bird and lizard species will have suffered from this reinvasion also. On a somewhat positive note, the Trust rangers were able to reduce the catches to just five stoats in January 2021 and no catches in February. A full reserve stoat dog survey in late April 2021 only provided two indications of stoat presence (the rangers are working hard to catch these rogue stoats). It may seem all doom and gloom for 2020, but there were some positive highlights operationally:

A combined two-year drought and a stoat re-invasion has not helped with the vision to restore BHSR to its former times prior to humans. The Trust must embark on a far more ambitious path than very low suppression and take the reserve to zero invasive predators (ZIP) if we are to enjoy the full day bird song and future translocations of lost species. The operations team is therefore already well on the way to planning for this shift up in operations and will be setting the platform over the next two years (2021-end of 2022) to start implementing by 2023. To try and better protect sensitive species such as the gfp, more intensive measures are being implemented prior to the 2021 breeding season including directly targeting stoats with PAPP, new lures, more cameras and other trap tools. During the next two years we aim to install an intensive boundary network of predator control and surveillance devices along Ocean Beach Road, capturing invaders early and allowing the Trust to monitor how these predators are moving through the landscape. The next BHCT five-year operations plan will highlight this foundation work and then add in the necessary mahi for years 3-5, envisaged to contain the ZIP systems which should allow for further translocations of selected sensitive endemic species back to Te Whara/Bream Head. Funding applications, such as that with Foundation North, have already been designed around this approach with funds sought initially to install the platform devices and systems in preparation for the ZIP programme during 2023. Finally, the arrival of NRC’s Predator Free Whangarei project, with its beginnings at BHSR this coming winter will complement the direction BHCT is driving toward over the next five years and beyond. This larger landscape approach will have a huge impact in reducing the pressure BHSR receives from invading terrestrial predators from the land bridge to the north of Te Whara/Bream Head. With a zero-predator environment at BHSR, and some help from the rain gods, the future vision of all day bird song, increased lizards, invertebrates, freshwater species and improved habitat is more realistically achievable!